David Walliams books for children include Mr Stink, Gangster Granny, Demon Dentist and The Midnight Gang. Read his biography and buy his books. 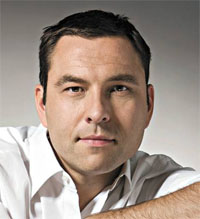 David Williams started as an actor and wrote comedy series’ for the BBC from 2003.  He has appeared in many television shows, documentaries and films. Maybe you have heard his voice in the films ‘The Chronicles of Narnia: Prince Caspian‘ or ‘Pudsey: The Movie‘.

In 2008 David Walliams wrote his first children’s book called ‘The Boy in the Dress‘ about a 12 year old boy who tries something out of the ordinary.

A year later David Walliams wrote  his second book about a smelly tramp that changed the lives of one family. It was called ‘Mr Stink‘. David Walliams then went on to win ‘Children’s Book of the Year’ for ‘Ratburger‘, ‘Demon Dentist‘ and ‘Awful Auntie‘.

David Walliams has raised lots of money for Sport Relief by doing sponsored swims. In 2006 he swam the English Channel. It took him 10 hours and 34 minutes to swim 22 miles (35 km). He raised over £1 million for Sport Relief.

Next he swim the Strait of Gibraltar for Sport Relief. The swim from Spain to Morocco took 4½ hours.

In September 2011 David Walliams swam the length of the River Thames which was 140 miles. He raised more than £2 million for Sport Relief. Not only did he raise so much money but he also managed to save a dog too!

World of Walliams
A fun website with games, news, books and all about David Walliams.