Countries of the United Kingdom (UK)

There are four countries that make up the United Kingdom (UK) these are, England, Scotland, Wales and Northern Ireland.

England, Scotland and Wales are all joined together on one island whereas Northern Ireland is together with Southern Ireland which is not part of the UK. 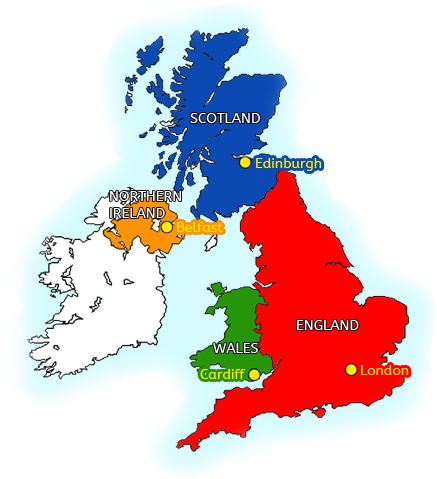 Flags of the United Kingdom

Each country of the UK has it's own flag.

The United Kingdom also has its own flag. It is called the Union Jack. The Union Jack is made from joining the four flags together. It's a union (means joined together) of the four counties.

England has borders with Wales and Scotland. The capital city of England is London. London is home to many famous landmarks such as Tower of London, Big Ben and The Houses of Parliament and The Shard. It is has Buckingham Palace which is the official home of the British monach (king or queen).

Much of England are low hills and plains, especially in central and southern England. In the north it is more mountainous has England reaches Scotland.

Scotland is the most northerly part of the UK. The capital city of Scotland is Edinburgh. You might have heard of Edinburgh Castle which is one of the most famous castles in the world. Edinburgh is also home to the Scottish Parliament who make decisions on how the country is run.

Like Edinburgh the city of Glasgow is in the south of Scotland where they have easy connections to the rest of the UK. In the north of Scotland you'll find the Highlands. It's more open here with large mountains, valleys and lakes. Here you will find the highest mountain in the UK, Ben Nevis. One of the deepest lakes is called Loch Ness which attracts many people each year all looking for the Loch Ness monster that they believe lives there.

Wales is located west of England. The capital city of Wales is Cardiff in the south of Wales. When Wales first joined the union is was ruled by England. Now Wales has some power to decide the running of the country. The government in Wales is called the Welsh Assembly. They can make decisions on health, education and the environment.